by David Rizzo, aka Dr. Roadmap 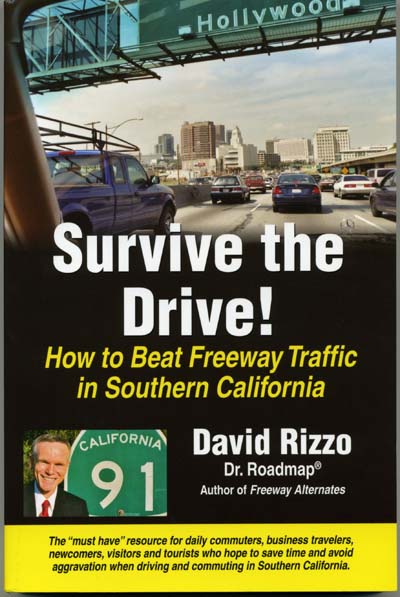 My old truck is every bit as fast as a Ferrari in traffic. We both travel along at roughly 30 miles per hour and despite the coolness and power reserves of the Ferrari, we are equally stuck when it comes to traffic. A shot of nitrous won’t do either of any good when confronted with bumper to bumper situations. What will help is this book by David Rizzo, aka Dr. Roadmap.

Survive the Drive! is David Rizzo’s second effort at helping Southern California commuters and travelers avoid the worst freeway congestion spots. His first appeared as Freeway Alternates, just after the Northridge earthquake, and helped launch him to local prominence.

Rizzo successfully mixes anecdotes, research facts, and official reports to alert us all on how to best cope with traffic situations. Without giving away too much, the short story is: listen to radio broadcast traffic reports before getting on the road.

Solutions to stuck traffic abound. Survive the Drive! provides more than simple alternate routes, it gives the reader a regular strategy for daily commuting, tells us how to best avoid problem spots, and how to cope with traffic-related stress.

Rizzo further explains the terminology used by traffic reporters and CHP officials to describe both locations and traffic events. For example, why is the 110 called the Harbor Freeway in some places and Pasadena Freeway in others? What constitutes a SigAlert? Where exactly is the Orange Crush? Why is the on-ramp signal holding me up when I can see there is light traffic ahead?

Even the tried and true commuter has much to be learned from this book. Rizzo has done a terrific job of culling pertinent facts from mountains of governmental reports and filings regarding Southern California transportation issues. Rizzo approaches the task at hand by first explaining why traffic “happens,” then how to deal with it when it happens, and what to do when you are involved in an emergency.

This is not a story book by any means. It would be wrong to try and read this book in a single sitting, though I suggest you read the first two sections in one pass. Keep a copy in your home and office as a reference piece to look at before hitting the road. The indexed maps of alternate routes around known slow zones are worth the price.

Survive the Drive! is a valuable resource hammer for your commuting toolbox.

Return from Survive the Drive to Book Reviews